THE TEAM EXPERIENCE – AN INTRODUCTION FOR NEW PLAYERS

THE NEXT STEP ON THE LADDER 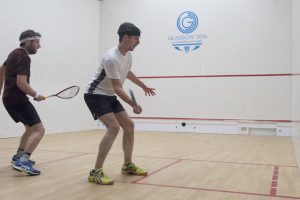 Players who have just started playing squash and are enjoying it often hear about “playing in the teams”, and see it as some daunting terrifying goal that they probably will never achieve – whereas in reality that’s definitely not the case! What are the teams, and what should you expect if you get asked to play?

The evening officially starts at 6:45 PM. Sometimes people are early, more often they’re late. It’s a great idea to try and play earlier than the official start time, for example 6:15 or 6:30 PM – it just makes the night shorter and lets you get home earlier! Team captains can arrange things with other teams if given advance notice, so if you’re going to be late due to work, then it’s not a problem to let your opponent know in advance. It sounds like common courtesy, but it’s the right thing to do and can prevent any bad feeling… there’s nothing worse that arrving at 6:30 PM and waiting until 8:45 PM for your opponent to turn up!

Half of the team matches will be “home” matches and played at Scotstoun, and half the matches will be “away”. In reality, 90% of the clubs are all in the Greater Glasgow area, so you don’t have far to travel. Players frequently share lifts to the away venues for convenience. On the rare occasion that you are playing further away, there’s the knowledge and comfort that it’s only once a season you have to visit there! 🙂 It’s great experience to play in different venues with different courts. You get plaster walls, plastic cladding and high density hardboard. You get glass-backed courts where you can see behind the court and you get normal plaster backed walls. You get warm courts and you get cold courts, poorly lit and well-lit, clean courts and dirty courts and sometimes slippy courts. It’s all part of the experience of getting better at squash that you learn to adapt your game to suit. And that’s just the courts… you’ve still got the ball and your opponent to get used to!

Your match is your key focus of the night, because that’s why you’re there. This is where the invaluable learning happens, that will undoubtedly help you to become a better player. Sometimes you win easy, and you feel unsatisfied – the thing to take from this is you’ve played your part for the team and helped the club. Sometimes you lose quickly and feel angry or disappointed – that’s natural. When you have matches like these reflect on what you could have done better, how they beat you, and listen to what your team mates say after the match. The last scenario is you have a really tight close match, you come off shattered, and (hopefully) you’ve won! These are the matches that you look for in a team match, because they’re a really learning and growth time for you. Take as many lessons as you can from matches like these! 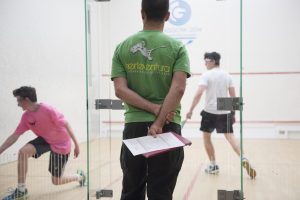 There’s no commitment to have to play EVERY Wednesday night – work, family and health issues happen for everyone, and the team can change from week to week based on availability. Having said that it would be great if everyone could play reasonably frequently, because it means we have stronger teams out on the night and (hopefully!) better results.

One of the best things about team matches is the sense of team spirit and cameraderie. It’s a great help when you’re one nil down and your team mates come down during the 90 second break and tell you exactly how to turn the match round. It’s even better when you can do the same for your team mates!

A fear people often have is refereeing, but it’s just part of the night. The rules are that the home team has to referee at least three matches and the away team has to ref the other two. Refereeing is just experience and to be honest, it helps you become a better player when you can recognise lets and strokes in a different game, you an start to understand them more in your own matches.

Team matches teach us about about court etiquette and gamesmanship – it’s just part of the game that you will undoubtedly meet opponents who will try to “get under your skin” or “get inside your head”. It’s important to remember in all matches that you’re representing not only yourself, but also the club and our sponsors when you play in a Team match. There are “dirty” tactics such as hogging the ball in the knock-up (a good rule of thumb would be no more than 4 shots back to yourself), taking too long in between rallies (play should be continuous), and “blocking” (not allowing your opponent a direct line to the ball). It’s never nice when you meet opponents that play like this, but it’s better to know that you don’t go down to their level and bring your standards down to their level. It’s even better when you beat them! As the coaches out there will remind us, you can’t control your opponent, only yourself!

Once all five ties (matches) are done and dusted, the match is finished and it’s time for the social part of the evening. Every club or team has different refreshments that they provide for the opposing team, sometimes it could be chinese, sometimes soup and sandwiches and sometimes it might be a lasagne or an indian. It’s a massive part of the team experience that as many of the team stay until the end to talk over the match and to socialise with the opponents – you can make good friends out of it all and it really does make team squash a far more enjoyable experience!

Squash has re-opened! Courts are now available for booking through the reception or the Glasgow Club App.

Our coached sessions are not yet up and running, however we hope that these sessions will restart in the near future – watch this space!